“We are pleased to see our Simulation Division building on the positive results that were achieved in the first half of 2018,” commented Arotech CEO Dean Krutty.  “In the third quarter, our MILO Training Systems group expanded its growth in U.S. military sales with penetration into the U.S. Air Force, and our vehicle simulator sales, both commercial and military, are running well.  Strong sales and delivery of our simulation-based training products are improving our outlook for this division.”

“Our Power Systems Division was informed that we won an important award with SPAWAR on a new IDIQ referred to as Cyber Mission Kitting.  This was offset by news we received in Q3 that the United States Marine Corps is discontinuing its efforts to upgrade the aging AAV fleet that was undergoing survivability and electrical upgrades under a prime contract with SAIC.  Our role on the program as a subcontractor to SAIC was likewise terminated for convenience, which has removed some anticipated revenue from our backlog and pipeline.”

“Our battery group in Israel is delivering on what we expect to be a new sales record for water activated battery life jacket lights to the aviation and marine industries.  At the same time, the new product investments we began this year are beginning to produce initial sales, and are validating our commitment to diversifying our customer base,” concluded Mr. Krutty.

Revenues for the third quarter of 2018 were $23.8 million, compared to $25.9 million for the corresponding period in 2017, a decrease of 8.0%. The year-over-year decrease was primarily due to a decline in the Power Systems Division related to the termination for convenience order on the AAV program, as well as the decline in battery orders from the Israeli Ministry of Defense contract that was completed in early 2018.

Gross profit for the third quarter of 2018 was $7.3 million, or 30.7% of revenues, compared to $7.3 million, or 28.0% of revenues, for the corresponding period in 2017.  The year-over-year increase in gross profit percentage was primarily due to program losses incurred in 2017 in the Power Systems Division and, to a lesser extent, product mix in the Training and Simulation Division for the current period.

Operating income for the third quarter was $1.1 million compared to $1.3 million in the corresponding period in 2017.

Adjusted Earnings Before Interest, Taxes, Depreciation and Amortization (Adjusted EBITDA) for the third quarter of 2018 was $2.4 million, compared to $2.3 million for the corresponding period of 2017.

Revenues for the first nine months of 2018 were $73.0 million, compared to $69.7 million for the comparable period in 2017, an increase of 4.6%. The year-over-year increase was driven primarily by higher revenues in the Company’s Training and Simulation Division related to its vehicle simulation and use of force products, partially offset by a decline in the Power System Division revenue as a result of the decline in battery orders from the Israeli Ministry of Defense contract that was completed in 2017.

Gross profit for the first nine months of 2018 was $21.6 million, or 29.7% of revenues, compared to $19.7 million, or 28.3% of revenues, for the prior year period. The year-over-year increase in gross profit percentage was driven primarily by higher revenues in the Company’s Training and Simulation Division, partially offset by lower revenues in the Power Systems Division.

Adjusted Earnings Before Interest, Taxes, Depreciation and Amortization (Adjusted EBITDA) for the first nine months of 2018 was $6.0 million, compared to $4.4 million for the corresponding period of 2017.

The Company had a current ratio (current assets/current liabilities) of 2.1, compared with the December 31, 2017 current ratio of 2.0.

The Company’s backlog increased by 1.7% over the same quarter last year and 15.7% over the prior year end.

The Company will host a conference call tomorrow, Wednesday, November 7, 2018 at 9:00 a.m. Eastern time, to review its financial results and business outlook.

To participate, please call one of the following telephone numbers. Please dial in at least 10 minutes before the start of the call:

Arotech is incorporated in Delaware, with corporate offices in Ann Arbor, Michigan, and research, development and production subsidiaries in Michigan, South Carolina, and Israel. For more information on Arotech, please visit Arotech’s website at www.arotech.com.

Except for the historical information herein, the matters discussed in this news release include forward-looking statements, as defined in the Private Securities Litigation Reform Act of 1995. Forward-looking statements reflect management’s current knowledge, assumptions, judgment and expectations regarding future performance or events. Although management believes that the expectations reflected in such statements are reasonable, readers are cautioned not to place undue reliance on these forward-looking statements, as they are subject to various risks and uncertainties that may cause actual results to vary materially. These risks and uncertainties include, but are not limited to, risks relating to: product and technology development; the uncertainty of the market for Arotech’s products; changing economic conditions; delay, cancellation or non-renewal, in whole or in part, of contracts or of purchase orders (including as a result of budgetary cuts resulting from automatic sequestration under the Budget Control Act of 2011); and other risk factors detailed in Arotech’s most recent Annual Report on Form 10-K for the fiscal year ended December 31, 2017, and other filings with the Securities and Exchange Commission. Arotech assumes no obligation to update the information in this release. Reference to the Company’s website above does not constitute incorporation of any of the information thereon into this press release. 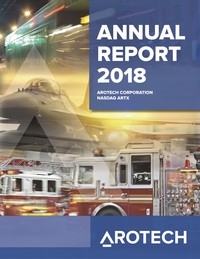